Day 26 – A book that you liked reading until the ending.

Most books, if I don’t like the ending it’s because there’s another book in the series I need to read, and whatever conflict I’m so angry about will be solved.

No so with this one. 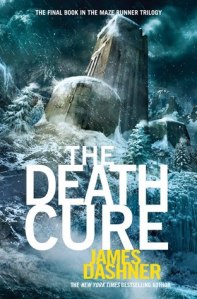 What the heck is going on here?

I read everything in this series, including the book that comes after this one. So I’m fairly satisfied that my dissatisfaction is justified.

So, there’s a bunch of solar flares that destroy much of the world. And a disease called the Flare that is highly contagious, and its incubation period grows longer with each infected person, so it gets everywhere. It eventually drives you crazy in a violent cannibalistic fashion. A group called WICKED is trying to figure out a cure by putting a bunch of kids in a maze, and setting up monsters to kill them. There’s a lot of head games, layers within layers, and lying going on.

And I just don’t see why. Why is this going to help? How? Who? They’re killing off some of the rare Immunes  too, which strikes me as stupid. And they never seem close to success, so they’re just wasting time and resources better spent preventing the annihilation of the human race.

I hoped this last book would make it all make sense, but it didn’t. It’s an interesting concept, and the action is riveting in places, but it just lost me at the end.