Jennifer M Eaton’s doing a blog hop critique–250 words (plus the end of the last sentence)–you post, critique others from the list, and critique back anyone who gives you a critique. 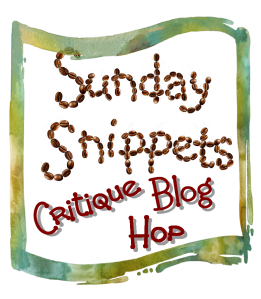 I’ve chosen a snippet from the beginning of the second book in my Witch of Atlas series.

Background: Humans found out 23 years ago that the fey–creatures like unicorns, elves, and pixies–are real, and so is magic. Althea Raven is a witch who works as a consultant, dealing with the problems that arise from supernatural creatures interacting with humans.

Here’s a link to Snippet 1, should you be curious. But I respect your time, so…

Bare bones summary: Two FBI agents knock on Althea’s door. As they’re talking, something screams in the backyard, and they all head back.

UPDATE: Took a stab at some of the issues. Once again the corrections made me go over… But not so badly this time. This is progress, perhaps.

Althea headed through the side gate, and followed a grassy path through the profusion of greenery growing in garden beds dotting the yard.

Stopping near her guest bedroom’s window, Althea looked down at the auburn-haired man pinned under one of her larger guardians. Two feet tall, the bronze dragon sat on the man’s stomach, feet tucked under it, tail curled around it like a cat. The little dragon figure on her windowsill still cried an alert.

“Can I move, please?” He shifted, and the dragon hissed.

“Sure.” Althea gave her guardian a nod. When the little statue hunched down instead, she pointed at the open window ledge, feeling like a mother herding her troublesome children. Her guardian jumped on the window ledge next to its smaller counterpart. Both bronze dragons watched the agents with glowing green eyes.

“Creepy spell,” the crooked-nosed man looked away from the animated statues.

“They’re security. I’ve got warnings posted; you ignored them. What do you want?” Althea couldn’t quite keep her growing irritation out of her voice.

“Actually, we need a favor,” the red head said, getting up and brushing himself off. He quickly removed any visible flecks of grass, straightened every article of clothing, and restored his auburn hair to its casual disarray. “We’ve gotten off on the wrong foot. Can we start over?” He offered her a bright smile, revealing a set of dimples.

He was good-looking, Althea thought, in a polished fashion. But his smile warmed his chocolate brown eyes a bit much to be believable. “Are you seriously flirting with me?”

The brown-eyed man fixed her with a puppy-dog stare. “Well, we really-”

“I told you she’d know,” the woman rolled her eyes at the red head.

Click on over to these great writers to check out and critique what they’ve posted!