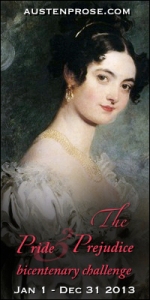 My August book for the Pride & Prejudice Bicentenary Challenge: 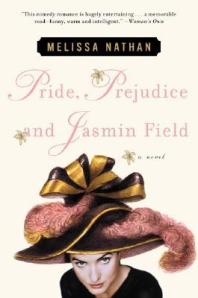 A modern version of Pride & Prejudice, about Jasmin ‘Jazz’ Field, journalist, her actor sister Georgia, and her best friend Mo–who all audition for roles for a charity-event one-night stage production of P & P.  Jasmin is surprised to be cast as Elizabeth by the famous actor Harry Noble, who is directing the event, after he refers to her as The Ugly Sister.

The parallels don’t stop there: Jazz finds herself charmed by Wills, Georgia and Jack begin flirting, and the odious Gilbert has Harry’s aunt, Dame Alexandra Marmeduke as his patron. And Harry keeps staring at Jazz…

A sweet, modern twist on that old story, Ms. Nathan stayed true to the characters, without feeling the need to rigidly follow the original plot. And the story was the better for it. Despite and changes, it captures the core of P & P–the importance of family, of seeing people for who they are, not who you want them to be, and of forgiving people for their flaws.