Laughter or Silence: What Do You Find Funny?

This week, at my anime club, we watched a live action movie, about which the club put a warning on the fan page. They warned us about it at the previous meeting, and finally, the club leaders were warning people at the door.

“Do you know what this movie is about?” they asked, again and again.

Fair warning is fine–and the anime was quite something. There was partial nudity, inappropriate use of underwear, a lot of questionable humor. It’s not for everyone. But shouldn’t people give things a chance?

Me, I like to try. You never know unless you do, right? Sometimes I’m sitting in silence during a comedy routine that just doesn’t speak to me, but other times I get to laugh. And laughter is a great thing, in the end.

So I tried the movie, and yes, it was terrible. (Some of it is the differences in cultural senses of humor, I think, which is why some people don’t like anime. And that’s fine, because no one has to like anything.) But if you don’t take the movie too seriously, it was also terribly funny.

The kind of thing that you probably shouldn’t be laughing at, perhaps, but still hilarious. The whole theater was laughing, and if anyone was offended, they kept it to themselves. All the shouting at the screen was the usual jokes. 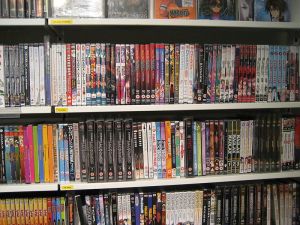 There’s a lot of stories out there. Some weirder than others. Image from WikiMedia by Klibbnisse.