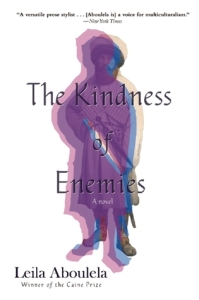 The Kindness of Enemies: Leila Aboulela.

This story is about Imam Shamil, a 19th century Muslim leader, and the clash between religions in the past and present.

The story is split between 2010 and the past, exploring the clashes between groups who want different things. In the past, it’s a war, and in more modern times, it’s the struggle against terrorism, labels, fitting in and being yourself. Natasha is half Russian, half Sudanese, a history professor, and her student, Oz, is descended from Imam Shamil, a 19th century Muslim leader who fought against Russia in the Caucasian War. She meets Oz and his mother, and forms a bond with their history, and the culture they share, which she has been trying to suppress. Then Oz is arrested for no more reason than his heritage, and Natasha must determine what she’s made of. Meanwhile, Imam Shamil fights a losing battle, his people giving up on independence, his family fractured, and his world changed.

In both cases, the besieged must rely on the kindness of their enemies, which in many cases is non-existent. The people with the power have a tendency to think that their way must be right–that if their opponents will just give in and conform that things will be better. And these good intentions can be terribly cruel. And cruelty certainly abounds in this book, making it a bit of a tough read at times. You have a sense of looming disaster, and it comes true sometimes, too–don’t expect too happy a story. 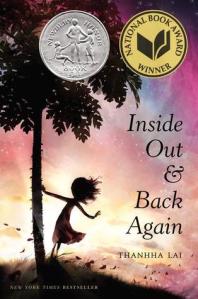 Inside Out & Back Again: Thanhha Lai.

This book is labeled middle grade.

This is the story of ten-year-old Hà, told in prose. She grew up in Saigon, immersed in the culture, traditions, and her family and friends, until the Vietnam War forces her family to flee the country. In Alabama, she’s confronted by new food, strangers in place of her friends, but also the strength inside her and her family.

These poems are lovely, concise and smart, and sometimes funny. Carefully crafted vignettes, they tell the story of an interesting life, and a peek inside a different culture, as well as a view of American culture from another gaze. It’s a short read, but full of some thought-provoking ideas and lovely imagery.

Posted by Caitlin Stern on April 28, 2016 in Books and tagged 2016, Book Riot, Inside Out & Back Again, Leila Aboulela, Read Harder, reading challenge, Thanhha Lai, The Kindness of Enemies.