I’m doing the 2016 Book Riot Read Harder Challenge, and you should, too! You could always start it next year, who’s to stop you? (Click the link to see the challenge, and to download a PDF of the challenge list.) 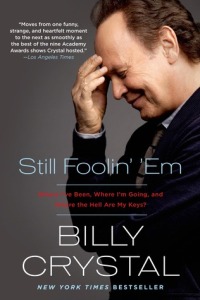 The audiobook I listened to won an Audie Award for Audiobook of the Year (2014).

Warning: there’s plenty of swearing and earthy humor in this book. If that offends, you might want to read/listen to something else.

Written for his 65th birthday, this audiobook skips between the past and present, the modern sections talking about what his life is like now, with plenty of jokes about growing old, but also loving what you have–and the past sections show how he got there. He chats about his career, family, marriage, and children, as well as some remarkable moments–friendships with celebrities, highlights in his career, and unique opportunities as a baseball fan. Ranging from funny to touching to sad, he discusses love and loss, triumph and failure. A great deal of other famous names make it into the book–even if everyone he meets isn’t terribly nice (more than a few of these celebrities suffer from the spotlight, or falling from it.) As he says to himself as part of his pre-performance ritual, he’s “still foolin’ em.” Still making people laugh, still full of wonder at the world.

While not all of his jokes made me laugh, there were plenty that did. In his far ranging topics, and full life, there’s something pretty much everyone can relate to. And we all grow old, unless we don’t get to. Fans of his work should enjoy hearing more about his life, and this pretty short audiobook is definitely worth a listen to hear the story told in his voice, not just read it in his words. Divided up into chapters that cover a period of his life, it’s also pretty easy to pause and pick up again without losing the thread of the story.

The copy I read is an ebook, but several versions are under 100 pages.

A great chess champion is traveling on a ship, and one passenger determines to speak with this man, who is a contradiction, considered both unintelligent and unbeatable. When the passengers (several who are interested work together) finally succeed in playing a game against him, they are soundly and effortlessly trounced until a stranger offers them advice.

It’s not possible with such a short story to describe much without giving something away, but the story seems to be about chess, and the kinds of people who play it. A great deal of fuss is made over the champion, how he’s not what people label traditionally smart–and how people who consider themselves smarter than him are so offended by him beating them. The stranger’s expertise, on the other hand, comes from not mechanical memorization but something more painful and wild. With all these motivations centered on games of chess, the book is pretty complex, and interesting in a sad, wistful sort of way.