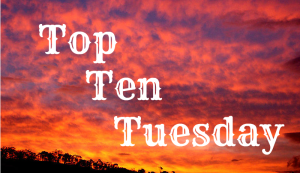 Because it’s almost Valentines, I like the kissing suggestion. Here’s my Top Ten Books I wish Had More/ Less Kissing.

1. The Hob’s Bargain; Patricia Briggs. A woman agrees to marry a kind of forest spirit to save her town. It’s a slow building relationship, and it works, but I always wanted a tiny bit more, to know that it would actually work.

2. The Burning Page; Genevieve Cogman. Librarians travel to alternate worlds to save rare books. There’s just a few hints–I could use a little more.

3. Jane Eyre; Charlotte Bronte. A governess in a very secretive household. Not really more kissing, per se, but more of a sense of attraction.

4. Grave Sight; Charlaine Harris. A lightning-struck woman can find the dead. There’s just a little more romance that could be in all of these books.

5. Anna and The French Kiss; Stephanie Perkins. Anna travels… and meets people. There’s a block to the kissing that I wish went away sooner, so there could be kissing.

6. Bridget Jones’ Diary; Helen Fielding. I would like Bridget a little more if she was less obsessed with men–though she’s still a hilarious disaster as is.

7. Outlander; Diana Gabaldon. Time travel. I find a lot of the physical side of things in this book… too much. I know it’s popular, but I couldn’t get into it.

8. The Fault in Our Stars; John Green. Tear-jerker romance about teens who’ve survived cancer. It’s really just one scene that’s kind of awkward, but I could have done with less of it.

9. A Kiss of Shadows; Laurell Hamilton. An exiled fairie princess, with a dangerous court. Somewhere in this series, the story began wandering away from the plot for pages at a time.