And the Book Riot Read Harder Challenge is here again! There’s 24 prompts to encourage you to read harder, and I urge you to check it out if you want to get outside your comfort zone. 🙂 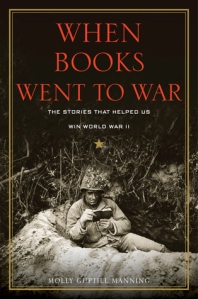 The story of books provided to the military during WWII, included special editions printed to fit in the pocket.

This book, like a lot of books about real events, is a mix of tragic and hopeful. During WWII, 100 million books were burned, and many people, military and civilian, died. But the US also worked together to send 120 million special lightweight paperbacks to the troops. And those books saved and changed lives, as well as having a sweeping effect on the publishing world. A little piece of home, a reminder of what they fought for, an escape from battle conditions–the books that went to war were a lot of things, as good books are.

A short, but thorough read, the books covers a lot of details, including a list of every title published at the end. Sadly, there’s more than a little in-fighting and blame shifting going on, but overall, the country did fairly well with these portable and tough little books (though they did suffer quite a lot of abuse). And reading the results afterwards, when all these men took that new love of reading home, often to further their educations, is uplifting to any reader.

The House of Spirits; Isabel Allende. 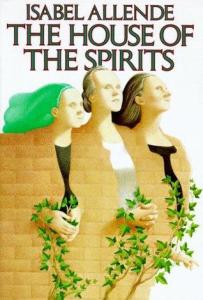 Allende is from Chile, and the book is set in “an unnamed South American country.”

This is a complicated one–it’s about three generations of a family, focusing on Esteban Trueba, his wife Clara, their children, and grandchildren, as well as Trueba’s illegitimate offspring. Trueba builds a grand house for his family, and works his land, and to some degree takes care of the people who work for him–there’s love and war as time goes on, and the things he builds fall apart. Trueba speaks for himself, often in flashbacks, telling how his story ends–and he does a lot of excusing his behavior, and claiming his goodness, which got on my nerves. He isn’t, in my opinion, all that good, but some of the people around him are. The story is lyrical and complex, and at times a difficult read, but others quite fascinating if you have the patience for a slow book.

I didn’t like this one as much as I hoped, mostly because I didn’t like Trueba, and because of the way it’s told–with plenty of foreshadowing–I knew bad things would happen to good people, and nothing much to bad people. But it’s a lovely book, so your mileage may vary!