Here’s the new Book Riot Read Harder Challenge for 2018! There’s 24 prompts to encourage you to read harder, and I urge you to check it out if you want to get outside your comfort zone. It’s always great to see the new suggestions, and I’m still working on finding the perfect titles.

To quote the article: “We encourage you to push yourself, to take advantage of this challenge as a way to explore topics or formats or genres that you otherwise wouldn’t try. But this isn’t a test. […] We like books because they allow us to see the world from a new perspective, and sometimes we all need help to even know which perspectives to try.” 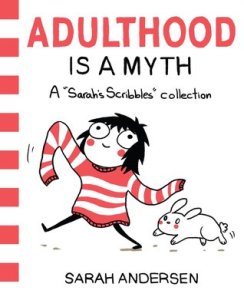 Adulthood is a Myth; Sarah Anderson

Growing old is mandatory, growing up is optional. Cute, simple comics about procrastination, love, anxiety, shopping, etc. Short and sweet, and relatable to anyone who doesn’t always feel like an adult. There’s not much more to say about these, other than it’s a quick read, but not just entertainment–there’s some thoughtful comics, too. But it has a light, wry feel, a great antidote to too many dark, serious tomes.

The reservation is located in Montana.

This is a story about several Natives on a reservation, their lives entwined by bonds of love or blood. There’s Louise, who has a gravity to her, drawing men’s attention, though she quite often suffers for it, as these men see her as a possession and not a person. There’s Baptiste, who has powerful medicine, they say, and struggles with his inner demons. There’s Charlie, who is part and apart as a police officer, treated as less than by the whites, but still not quite the same as the other natives.

Their lives are complicated by medicine, violence, drinking, and death. Motives tangle and complicate the story, told from multiple points of view. Though sad at times, there’s hope there, too. Overall, this is a tough, strangely dreamy (or maybe nightmarish) story. There are a lot of people hurting themselves and each other, and a lot of opaque motives. 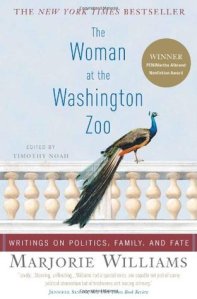 The Woman at the Washington Zoo; Marjorie Williams

Marjorie Williams died of cancer in January 2005, her selected writings were published the next year.

The first part of this is political articles, focusing on one important character or another. Though well written, they didn’t much appeal to my interests. Though in a few cases, they caught my eye with the focus of hindsight–written a decade or two ago, her comments on possible futures are sometimes prescient. Part 2, more personal writings, on work, family, and more politics–it was her life–was far more appealing to me. Some of them covered topics not too relevant to me, but they were well written, and more personable, so they kept my interest regardless. The third part is the tough one I knew was coming–about the cancer that killed her. It’s, despite its sadness, the part I enjoyed the most. By the time they caught the cancer, it was too late to do much, but she squeezed as much life as she could into her remaining time, and that’s hopeful and bittersweet and just like life.

Posted by Caitlin Stern on March 1, 2018 in Books and tagged Adulthood is a Myth, humor, memoir, Native American, Perma Red, politics, The Woman at the Washington Zoo.